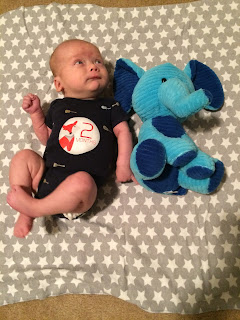 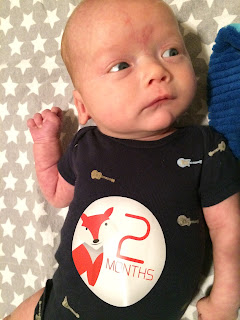 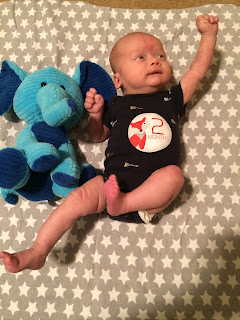 He's growing great! Both his percentages are up and the doctor is really happy with his gains. He's happy and healthy... well, happy might be pushing it... :/ 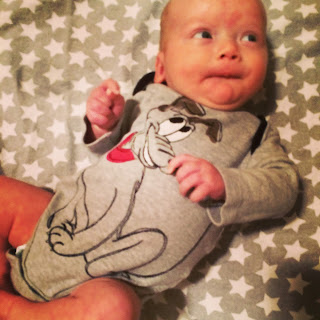 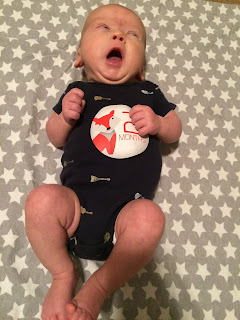 MOST nights, he goes to "bed" at 7:15pm right after nursing. Then, he wakes on his own b/t 10-11pm, 1-2am, and, then again around 5-5:30am, before getting up-up for the day at 6:30am. The last wake-up is the worst. SOMETIMES, if he doesn't get up til 2:30am for the one before, he can make it to 6:30am. It's just so inconsistent and nothing we try seems to ensure 1 thing or another. And trust me, we've tried it all. Bottles, nursing, nursing and bottle, gripe water, gas drops, sleeping in Rock N Play, sleeping in crib, sleeping near us, sleeping in own room. We've tried. it. all. Ok, everything except co-sleeping. It's just not for me. But, beyond that- man. We've tried it. I think... perhaps... he's JUST A BABY and just not ready to be consistent yet. SHOCKER, I know. Keep reminding me of this, ok? I forget. A lot. LUCKILY, most nights he goes right back to sleep, so he has his days/nights figured out pretty well. I'll take that. Oh! And we moved him to his crib (and often RNP) in his room sometime at about the 1.5 month mark. We all sleep so much better when he's in his room. Newborns are so noisy!


Awake Time/Schedule: Right now, his schedule is pretty good... it's a lot more fluid and changing than Bailey's was (poor second kid) because we're on the go and our schedule changes day to day. Baby's gotta fit into family, right? So, his schedule is: 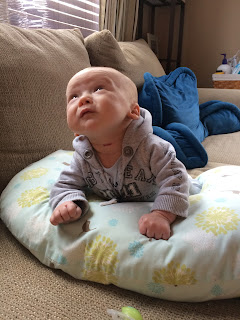 Nursing/Eating: Going well. I wish he'd stay latched on better instead of pulling off every 2 minutes, but it's going. He's gaining so I assume it's going ok. He's getting more efficient and our nursing sessions are quicker now. I'd say he averages about 7-8 minutes a side each time, when it was about 12-15 minutes per side. B never got faster, so this is a nice change. BUT, I still just DON'T enjoy nursing this time. I'll do it. I'll give it all I have to stick with it, but MAN, I'll be jumping for joy when we're done. Maybe you're not supposed to say or admit that, but I'm saying it. I just don't like nursing. There. Said it. 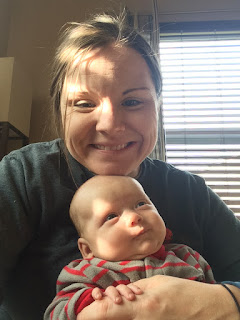 Likes: He's a mama's boy. Poor Hubs. Elias sometimes will only stop screaming if I'm holding him, esp during the witching hour. I'm hoping it's a short lived phase, b/c man it's rough. He also loves looking at lights and his big sister. He'd rather be held than anything in the world. He loves his paci, even if he spits it out constantly. He likes to be
elevated. Tummy time is either a total miss or a total hit. 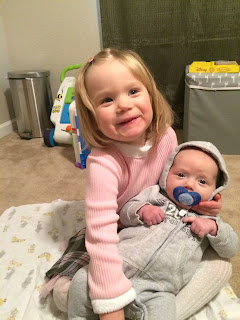 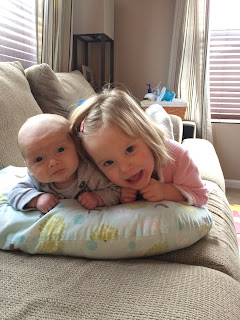 Hates: Getting into the car seat and being confined to it unless we're moving. Not being held. EVERYTING IN LIFE between the hours of 4-7pm. The doc said he has "a bit of colic". YAY. Super fun times.

Special Moments: First Thanksgiving! First Christmas! (ok, I guess technically that was after his 2 month birthday by a couple days). SO MANY FIRSTS! He's still so little and certainly doesn't "get" anything yet, but it's fun to have the first ones with him and makes me even more excited for when he does "get" it next year! 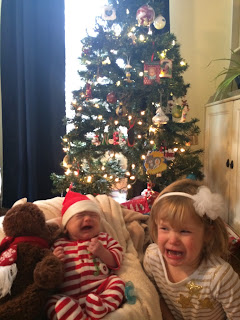 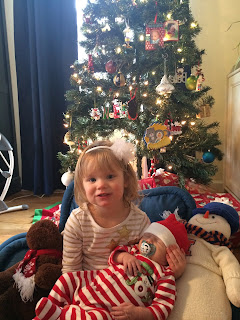 Can't believe it's already been 2 moths. I barely remember life before him and can't wait to see what tomorrow brings. Love this little nugget! 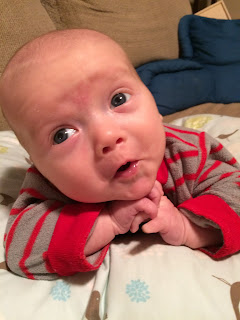 Posted by Managing Meagan at 2:20 PM